CARAVAN – WHO DO YOU THINK WE ARE?
37 DISC DELUXE BOX SET
THE ULTIMATE TRIBUTE TO THE LEGENDARY CANTERBURY BAND
RELEASED ON MADFISH ON 20TH AUGUST 2021
2,500 COPIES ONLY WORLDWIDE

The Canterbury scene combined elements of jazz, folk, rock and melodic pop into a sound that bridged the gulf between psychedelia and progressive rock, and ultimately shattered all genre barriers. At the heart of the Canterbury scene was a group of musicians whose career has now spanned more than half a century: the legend that is CARAVAN.

Who Do You Think We Are? is the ultimate tribute to the ultimate Canterbury band. This deluxe box set runs to a staggering 37 discs. All the official Caravan albums – studio and live recordings among them – are joined by eleven discs of previously unreleased live performances. A Blu-ray includes remixer extraordinaire Steven Wilson’s 5.1 surround sound mix of the classic In the Land of Grey and Pink album. In addition, a DVD includes vintage European TV performances from 1971 – 1981 (London Marquee, German TV’s Swing In, Bataclan, Paris & French TV show ‘Pop 2’).

The lavish packaging of the set reflects the band’s stature. A hardback coffee table book features rare Caravan photos and memorabilia, and a full discography. A second Fan Club book assembles historic press articles from across the band’s career, alongside a new interview with founder member Pye Hastings. Every copy of the box includes an individually signed photo by the three surviving members of the original Caravan line-up: Pye Hastings, Richard Sinclair and David Sinclair. The celebration continues with a selection of memorabilia: a Caravan-centric map of Canterbury; a specially commissioned Caravan family tree poster, charting their long and circuitous progress; and two replica 1970s gig posters. 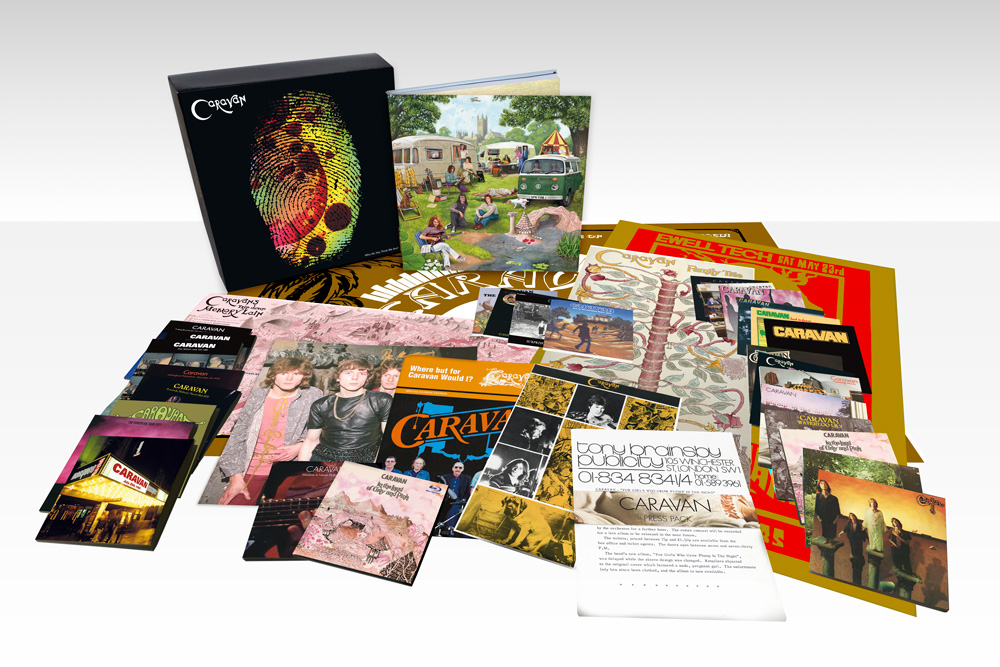 Put together with the band’s full co-operation, the full list of contents is as follows:

This box set will be limited to 2,500 copies worldwide and released on August 20th 2021 on the Madfish label. This deluxe box set is available to pre-order.