Caravan fan, Pat Coffey has written a great review of the 2011 Canterbury Festival gig, which we have reproduced below for your reading pleasure. 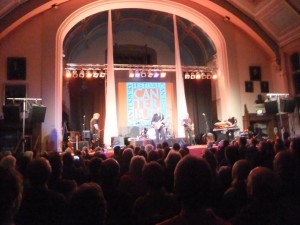 What more perfect a setting could there have been for Caravan to end their triumphant 2011 European Tour than in their spiritual home of Canterbury. All year, our intrepid boys had delighted their fans in all sorts of exotic hotspots … Tel Aviv, Trieste, London, Portugal, Edinburgh, Leamington Spa, but surely there can have been no warmer welcome anywhere than in their ‘home’ town where that wonderful Caravan journey began all those decades ago – sorry guys!

There really was a special buzz about the evening – and it was more than just the excitement of seeing the band again. The boys were back home and the City was looking at its finest for its Festival – the ancient streets meandering past the brilliant new Marlowe Theatre and the stunning backdrop of the Cathedral … and lo and behold an excellent Italian restaurant fortuitously placed right opposite the hallowed gates to our venue at Kings School. How convenient. We did wonder about the 7.30 start but my friend Paul reckoned that that was just rock and roll and there would be plenty of time for that 3rd glass of Chianti. There did seem to be an awful lot of people going in though and the man at the gate was confident that the boys would be starting right on time.

Chianti downed then, in we went, and a good job we did – the hall was packed and ready to rock – 600 there said Martin Davenport and I could believe it. What a spectacular venue – the backdrop of the brilliantly lit cathedral, the history all around us and the serried ranks of former Kings’ pupils gazing down at us from the panelled walls. Quite what the likes of Field Marshal Montgomery, William Harvey and several august churchmen would have thought of it all I cannot imagine. I’d like to think they would have approved of ‘The Dog, The Dog’, & ‘And I Wish I was Stoned’, but I cannot be sure. I’m sure they would also have been entertained by the 2 lively young ladies selling merchandise in the foyer. One sported pink hair, though I wasn’t sure if the other was grey?

Anyway, to the music. The boys soon trooped in to a loud and most enthusiastic cheer from an audience who were well up for this one right throughout the evening. Martin had been worried about how the band would sound in such a large hall, but they came through loud and clear, although Geoff’s viola could have done with some boosting early on – his sound is so good it was a shame it got a little swamped from where we were sitting.

It was such an excellent set though. Reprising the Shepherd’s Bush tracklist perfectly, it gave us a really good sense of the live album we queued up to buy in numbers from our pink haired friend at the interval. The boys started with their usual storming ‘Memory Lain’ and ‘Headloss’, and we enjoyed a fine range of music from way back when with ‘I wish I was Stoned..’ and bang up to date with ‘Fingers in the Till’, an excellent track, and ‘It’s not Real.’

‘Fingers in the Till’ was particularly cathartic for the band after their sufferings in the 1970’s, and ‘It’s Not Real’ was as good a song as Pye has written in many a year, again featuring superb drumming from Mark. There was also a poignant and prolonged round of applause for Richard Coughlan, everyone wishing him well at this difficult time. It must be said though that that Mark has added a new dimension to many of the songs, especially traditional numbers such as ‘Grey and Pink’, and the music seems as fresh and alive as ever but reinvented in a crisp and pleasantly surprising way. Richard must surely be proud of him.

The sheer musicianship was the feature of the night, with Geoff demonstrating his astonishing range of musical prowess, especially when fingering his viola, (they can’t touch you for it), in a brilliant duet with Jan in ‘Nightmare’ and then a stupendous ‘duel’ in ‘Golf Girl’ with Mark, on spoons and washboard respectively, and something else unmentionable Mark was waving about which made a very strange noise. It was a shame that Geoff couldn’t fit in his usual dexterity on the garden shears, but as was quite rightly pointed out to me, the clipping season is over. We also had the unusual sound of 600 apparently normal people making those strange ‘grimbly’ sounds on ‘Grey and Pink’ – I was glad I had had that second glass of winter wine.

Mark drove the whole show on with his usual verve and unflagging enthusiasm and Geoff paid tribute to the good fortune they had had in Martin finding him The key thing about Caravan though is not just the brilliance of their sound, and a wonderfully warm sound it is too, it is their sense of humour and their cheeky and quirky take on life and all its up and downs. There was a time when Prog took itself somewhat too seriously to say the least, but Caravan have never made that mistake. As Geoffrey said, Caravan were ‘Prawg’ in their own way, well before the term was ever coined.

Geoff paid tribute to Pye too, the only original current band member, now the ‘Lord of the Glen’ in his Highland retreat, but still at home back in the Deep South where it all started. Pye’s guitar work was superb tonight and Jim and Geoff helped his slightly husky vocals along. Jim always sings a great jazzy solo in ‘Nine Feet Underground’, and the boys played almost the whole of that classic album to great acclaim, Geoff also paying tribute to the songwriting of Richard and Dave Sinclair on that masterwork. Jan and Jim provided effortlessly smooth and flawlessly played bass and keyboards, Jan also getting quite jazzy from time to time in classic Caravan tradition, and all too soon we were into the encores and a very well performed and received ‘Love to Love You’ to finish.

Another tour draws to a close then and we wish the boys a good rest, but Martin is promising us another tour in the New Year when our Caravan of Dreams will be back on the road, and we’ll get that buzz of excitement all over again. As we headed out into the night air I looked up to the old boys on the wall, and fancied I caught the odd glint in the eye – Tonight Pigs will Fly I thought.